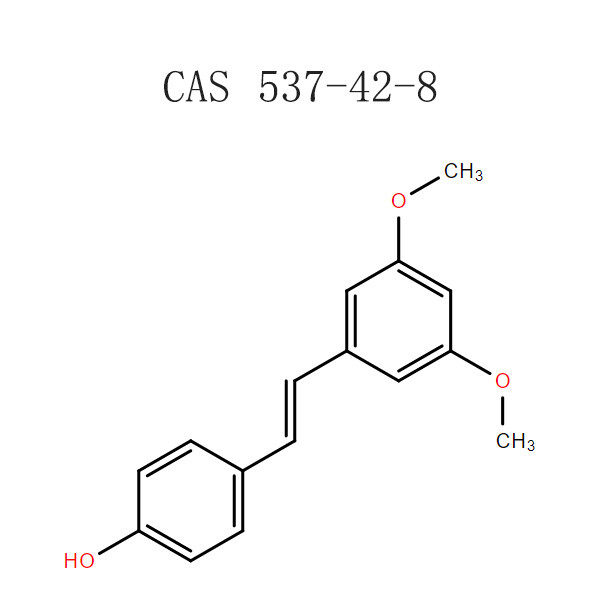 Pterostilbene powder is an antioxidant that primarily exists in blueberries, grapevines and heartwood of red sandalwood. Pterostilbene …….

Only one study has evaluated pterostilbene powder in humans. It found an increase in LDL-cholesterol and a trend towards lower HDL levels in people with high cholesterol levels who took 100 or 250 mg per day. It was unclear if the lower dose led to a reduction in blood pressure, but the reduction in the group who took the higher dose was potent.

Pterostilbene fights oxidative stress by rebalancing antioxidant enzymes. It increases superoxide dismutase 1 (SOD1) and peroxiredoxin-4 (PRDX4), which bind to reactive oxygen species. Researchers have observed this effect in human eye cells, suggesting that pterostilbene may protect from oxidative damage. Beside, Pterostilbene does also activate a SIRT1 signaling pathway that protects against cellular damage. This pathway increases the expression of p53, a protein that protects the DNA and prevents mutations that could lead to cancer.

Aolthough SIRT1 may protect against some of the degeneration and damage that takes place as we grow old. However, pterostilbene is not a magic pill against aging.

Pterostilbene also prevents stress within a part of the cellular machinery called the endoplasmic reticulum, or ER. In one study, when cells from the lining of blood vessels were exposed to pterostilbene, their ER did not respond to inflammatory signals, and they did not become inflamed.

Pterostilbene has a huge range of potential anti-cancer mechanisms. It may protect healthy cells and selectively damage cancerous cells. In glioma (brain or spinal cancer) cells, pterostilbene decreased Bcl-2 and increased Bax; these changes increase cell “suicide” signals and cause glioma cells to die off.

The monoamine oxidases, MAOs, are enzymes that break down neurotransmitters in the brain. One of these enzymes, MAO-B, selectively breaks down dopamine; as a result, drugs that block MAO-B increase dopamine in the brain. According to a recent discovery, pterostilbene inhibits MAO-B activity and, thus, increases available dopamine.

Pterostilbene powder may prevent Alzheimer’s disease by protecting the brain from beta-amyloid (Aβ). The precise pathway is unknown, but it appears to involve PI3K and Akt, two proteins that support memory, learning, and neuron growth.

In humans, doses of up to 250 mg per day are considered safe. Higher doses such as these have been demonstrated to reduce blood pressure and promote some weight loss. LDL cholesterol levels increased significantly as well, but this effect was completely negated with the addition of grape seed extract.

In animals, much lower doses have had cognitive effects. Between 1 and 2 mg per kg of body weight per day reduced anxiety in mice. Using a typical dose-equivalent calculation between mice and humans, the starting dose (in mg) for a person would be their weight in kg divided by 12.3. That works out to:

If you are taking pterostilbene powder for its cognitive benefits, you may wish to start with a very low dose. However, such low-dose effects have only been observed in mice thus far, and people may very well enjoy cognitive benefits at higher doses.

Pterostilbene powder is an antioxidant that primarily exists, it also has chemopreventive, antiinflammatory, antidiabetic, antidyslipidemic, antiatherosclerotic and neuroprotective effects. Beside, it also have some benefits as below: