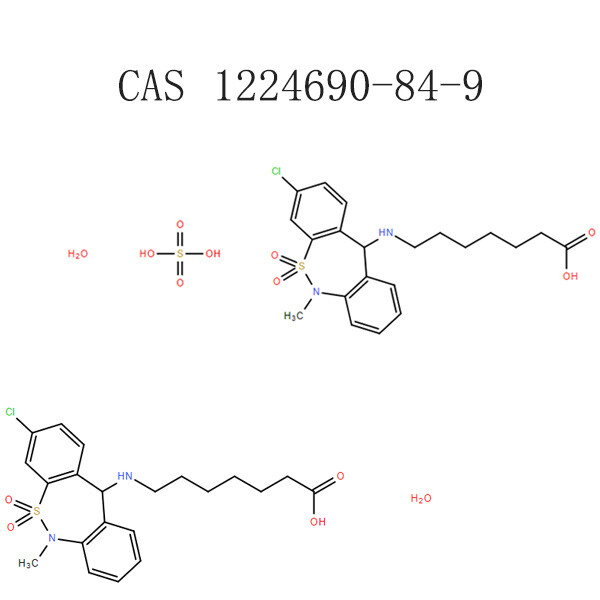 Raw Tianeptine hemisulfate monohydrate powder, also calledTianeptine Sulfate, is an improved version of the tianeptine sodium salt form. It is non-hygroscopic, easier to handle, goes down easier, and lasts twice as long. It has all of the same benefits as Tianeptine Sodium, only the sulfate form has a half-life of 5-6 hours, so it lasts twice as long as tianeptine sodium. Because of this, researchers will need 2-3 times the amount of sulfate to achieve the desired results that they have come to love from sodium. Sulfate is also less volatile in both taste and viscosity.

Tianeptine hemisulfate monohydrate is classified as a selective serotonin reuptake enhancer (SSRE) used to treat depression. Tianeptine was developed in France in the 1960s and has been used throughout the last part of the 2000s.

It is also sometimes used to treat irritable bowel syndrome or asthma. At heavy doses it is reported to produce opioid-like recreational effects such as sedation and stimulation, motivation enhancement, and euphoria when administered.

One of the primary modes of action for Tianeptine hemisulfate monohydrate is to increase serotonin (5-HT) uptake in the brain and in platelets. Unlike most tricyclic compounds, Tianeptine does not appear to be associated with decreases in cognitive performance or motor function. It appears to have activity on the glutamatergic system, which is hypothesized to be a novel antidepressant mechanism.

By increasing serotonin uptake, Tianeptine hemisulfate monohydrate has an opposite mechanism to traditional SSRIs. Recent studies have examined the effects of Tianeptine within the framework of the neuroplasticity hypothesis of depression, in which it may have some activity. Recent research also shows that Tianeptine may interact with adenosine A1 receptors.

Furthermore, very recent research published in 2014 suggests that Tianeptine may act as an m -opioid receptor (MOR) agonist. Researchers used radioligand binding and cell-based functional assays to identify Tianeptine as an effective MOR agonist. It is also a full d-opioid agonist but at a much lower affinity. Tianeptine was ineffective at k-opioid receptor sites.

▪ Anti-anxiety and antidepressant and nootropic qualities

Tianeptine hemisulfate monohydrate dosage is typically 25 mg once, or twice a day. Even when starting with a low dosage, it’s best to limit it to 2 or 3 days a week with at least 3 – 4 days in between.

Tianeptine hemisulfate monohydrate comes in capsule or powder form. It is recommended to start with a low dosage and increase by small amounts until the correct dosage is attained. Additionally, smaller doses reduces the potential for addiction, severe withdrawals, and tolerance.

♦Animal and human studies have been conducted on the treatment of Parkinson’s disease with Tianeptine hemisulfate monohydrate, showing promising results in improving mental health scores.

♦A preliminary study of 68 outpatients with ADHD concluded that the mean scores improved significantly and that Tianeptine hemisulfate monohydrate is beneficial in enabling better attention abilities and decreased hyperactive behaviors.

♦Tianeptine hemisulfate monohydrate is also an effective analgesic (painkiller), even for individuals suffering from chronic pain. It is an effective method for attenuating symptoms related to intestinal health issues as well.

♦Although more research is required, a study of 237 men with ED determined that tianeptine could be an effective therapy.

♦Tianeptine’s anxiolytic effects does not negatively impact acetylcholine or cardiovascular function, making tianeptine an excellent option for the elderly as well as otherwis