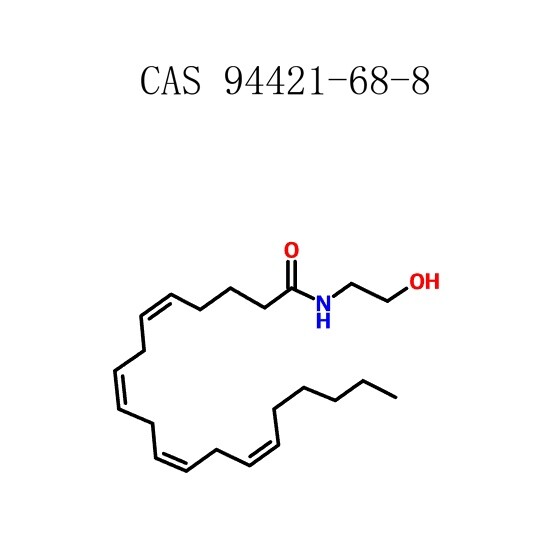 Anandamide, also known as N-arachidonoylethanolamine (AEA), is a fatty acid neurotransmitter derived from the ……..

What is Anandamide (AEA)?

Anandamide, also known as N-arachidonoylethanolamine (AEA), is a fatty acid neurotransmitter derived from the non-oxidative metabolism of eicosatetraenoic acid (arachidonic acid. It has a structure very similar to that of tetrahydrocannabinol, the active constituent of cannabis. It is degraded primarily by the fatty acid amide hydrolase (FAAH) enzyme, which converts anandamide into ethanolamine and arachidonic acid, Finally, Anandamide is synthesized in neuron by a condensation reaction occurs between arachidonic acid and ethanolamine under the regulation of calcium ion and cyclic monophosphate adenosidase. It is a precursor of a group of physiologically active substances (Prostamides) that play a role in many physical activities, including appetite, memory, pain, depression, and fertility. In addition, Anandamide also inhibits humans Proliferation of breast cancer cells.

As part of the endocannabinoid system (ECS), Anandamide is classified as a regulator of homeostasis along with another class of cannabis-like chemical 2-AG and endogenous cannabinoid receptors throughout the body. This system exists In all vertebrates. Anandamide plays a role in regulating feeding behavior and neurogenic motivation and pleasure, keeping our body and mind in balance. Studies have found that our emotions, happiness, fear, anxiety, and ability to withstand stress are all regulated by the endocannabinoid system, and various diseases from schizophrenia to depression are accompanied by abnormal anandamide levels.

Anandamide, similar to THC, is a partial agonist of CB1R. It may cause potential enhancements by “full” activation of the brain system. It is worth noting that all these effects of Anandamide seem to be enhanced by pharmacologically inhibiting its metabolic degradation. Anandamide’s discovery may lead to the development of an entirely new family of therapeutic drugs.

Anandamide, also known as a “bliss molecule”, is an mood enhancer, neurotransmitter and endocannabinoid, which has multiple health and mental benefits:

Anandamide reduces the rapid formation of cancer cells. In 1998, a group of Italian scientists discovered that anandamide can promote neurogenesis and form new nerve cells, effectively slow the formation/increase the value of breast cancer cells.

Anandamide’s ability to promote neurogenesis (the formation of new neurons) plays a role in controlling feeding behavior and generating motivation and pleasure in mice. This helps alleviate the symptoms of depression and anxiety. A study in 2015 of humans and mice found that high levels of anandamide can promote mood improvement and fear reduction.

How to increase anandamide(AEA) levels in the human body?

Because anandamide has a role as a neurotransmitter, a vasodilator agent and a human blood serum metabolite, and the health and mental benefits shown, you may want to increase the level of anandamide in your body. Here are some ways to temporarily increase anandamide levels in the human body:

The study found that after only 30 minutes of running, the anandamide(AEA) content of both humans and dogs increased. So if you want to get the most benefit, do some aerobic exercise often.

Dark chocolate has a higher proportion of theobromine in healthy chocolate, and theobromine helps increase anandamide production in the brain and temporarily slows its breakdown.

Black truffle (black fungus) naturally contains anandamide. Although the fungus cannot actually use anandamide in any way, researchers believe it is used to attract animals to eat it and reproduce its spores.

Research shows that when a person is in a state(called “flowing” or “in a region,”) of high concentration, performance, and concentration, not only will you become more productive or create better jobs in your brain It also releases a large number of chemicals, such as serotonin, dopamine, endorphin and anandamide.

Moreover, tea, coriander and celery can also help increase the production of anandamide.