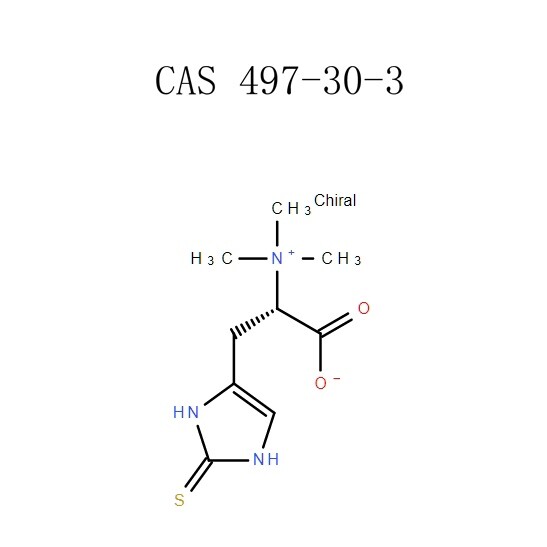 Ergothioneine is a naturally occurring amino acid and is a thiourea derivative of histidine, containing a sulfur atom on the……..

Ergothioneine is a naturally occurring amino acid and is a thiourea derivative of histidine, containing a sulfur atom on the imidazole ring. This compound is made in relatively few organisms, notably Actinobacteria, Cyanobacteria, and certain fungi.  Ergothioneine requires a specific transporter, EGT, also known as OCTN1 (gene symbol SLC22A4), to enter cells. EGT expression has been confirmed in human and animal cell lines and its functional ability to transport ergothioneine has been confirmed in vivo.

L-ergothioneine is a naturally occurring amino acid and is a thiol/thione derivative of histidine. L-ergothioneine is found in highest concentrations in mushrooms and bacteria and in lower amounts in other foods including king crab, beef, pork, lamb, and chicken.

Despite the presence of L-ergothioneine in foods humans consume, its biosynthesis has only been observed in certain bacteria and fungi.

L-Ergothioneine is an amino acid that is found mainly in mushrooms, but also in king crab, meat from animals that have grazed on grasses containing ergothioneine, and other foods. Amino acids are chemicals that are the building blocks for proteins. Ergothioneine is used as medicine.

L-(+)-ERGOTHIO is a natural chiral amino-acid antioxidant biosynthesized in certain bacteria and fungi. It is an important bioactive compound which has been used as a radical scavenger, an ultraviolet ray filter, a regulator of oxidation-reduction reactions and cellular bioenergetics, and a physiological cytoprotector, etc.

L-Ergothioneine is sometimes applied directly to the skin to prevent wrinkles, reduce signs of aging skin, and reduce sun damage.

L-ergothioneine is exceptional in that it can reach the very core of certain cells such as erythrocytes, unlike other classic antioxidants such as vitamins C and E. It actually has a gene which codes for a carrier protein, enabling it to be taken right to the heart of cells. It is thus a potent intracellular antioxidant, as important as L-glutathione. In addition, it has also been shown to be a powerful chelator, enabling it to bind to toxic heavy metals, while protecting blood cells from all types of damage.

Encouraged by its antioxidant properties, researchers subsequently investigated its anti-inflammatory effects, since ergothioneine acts on, amongst others, the pro-inflammatory cytokine, interleukin. L-(+)-Ergothioneine (EGT) therefore has multiple properties actively working inside the human body:

Although l-ergothioneine shares a name and can come from ergot fungus, it’s not poisonous in any way.

The European Union has stricter supplement standards than the United States and has determined that l-ergothioneine supplements are safe and produce no adverse effects in adults and children over.

The Panel on Dietetic Products for the European Food Safety Authority finds that safe daily limits of 2.82 mg/kg of body weight for infants, 3.39 mg/kg for small children, and 1.31 mg/kg for adults, including pregnant and breastfeeding women.

Appropriate supplementation and/or an improved diet including longevity vitamins such as L-ergothioneine supplement may reduce much of the consequent risk of chronic disease and premature ageing.

L-ergothioneine powder is an ideal ingredient for a healthy ageing, nutraceutical formula.

Research suggests that EGT antioxidant potential functions as an anti-inflammatory to further protect cells against physiological and neurodegenerative diseases.

Research shows that as an antioxidant, EGT might defend against inflammation.

Rheumatoid arthritis is an autoimmune disorder marked by intense (and often unexplained) inflammation.

It’s possible that EGT may reduce inflammation in patients with rheumatoid arthritis.

As a cytoprotectant, EGT is a popular supplement among Alzheimer’s and Parkinson’s patients.

By protecting brain cells, its plausible to prevent brain cell death in the first place and protect against neurodegenerative diseases.

Thanks to its cytoprotectant and antioxidant potential, EGT is a favorite amino acid in patients with liver disease.

You’ll often find EGT in many skincare products because of its cytoprotectant and antioxidant properties- which may protect skin cells from oxidative damage.

The US Department of Defense awarded a $1.34 million grant to researchers at the University of Colorado to study EGT’s antioxidant action for fighting lung diseases in combat veterans.